Tuesday started at a leisurely pace as we had the last breakfast slot.  This was particularly useful as we had some tired children last night who needed the extra sleep and lie in this morning.  It was also an extra special day today as it was Caitlin's birthday.  We started the day with a rendition of happy birthday before sharing your letters and giving Caitlin her birthday card.  She even got a card signed by all the instructors at PGL and a sticker giving her priority to go first on all the activities.  Later Caitlin gave all the children a 'lucky dip' present and we each had a mini roll cake to continue the celebrations.

Today's activities included the giant swing, abseiling, climbing  and archery.  It has been very busy but a lot of fun.  Many of the children set themselves a challenge as they faced activities they were unsure of and we were all very proud of them for doing their best.  The children also discovered that they are all braver than Miss Webster which, to be honest, isn't hard as she wasn't happy going any higher than half a meter off the ground!

The giant swing created the loudest screams and funniest expressions of the day.  The teachers tried to capture as many as possible but either missed them as the swing was going too fast or missed it as they were laughing so much!  The children got to choose how high the swing was pulled before they released it.  Even though they had complete control over when to release the swing, the moment when they suddenly dropped still came as a complete shock!

Abseiling and climbing provided the biggest challenges of the day to overcome.  Both towers were very high and the children had to dig deep to try and overcome any fears they had.  Some children relished the whole challenge though and sped down the wall when abseiling and climbed the wall like a seasoned professional!  Maybe we have some budding Olympic climbers in our midst?

The archery was a different sort of challenge, trying to pull the bow back whilst keeping the arrow aimed at the target.  We had a few bullseyes and a few not quite hitting the mark but whatever the outcome, the children tried their best to beat their previous score and hit the target.  Full marks for not giving up!

The evening entertainment was a campfire where the children listened to stories about strawberries and pink gorillas (I'll let them tell you all about them when they are home).  Songs were sang and games were played before we retired for an early night.  Breakfast tomorrow is the early slot (7am), I have a feeling that might be the first challenge of the day,  Tomorrow we have Trapeze and Problem Solving activities to end our trip.  Not a bad way to end our time at PGL.

Tonight's photos show the groups waiting to start the climbing wall or the fencing.  If you spot someone in one of the photos that you do not recognise, it is Stephen, our PGL Groupie who has been with us each day and who has been brilliant! 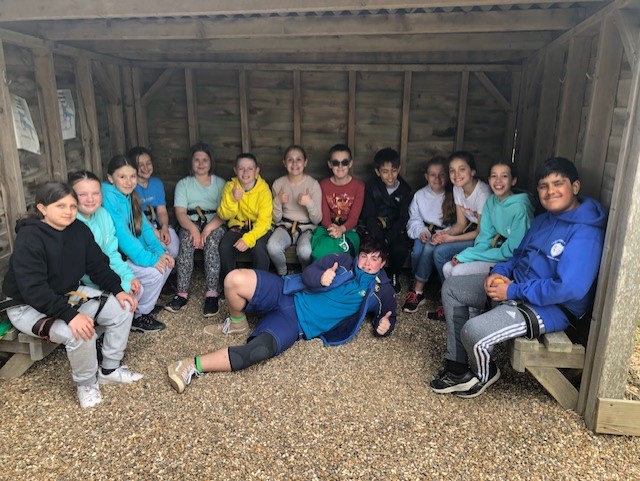 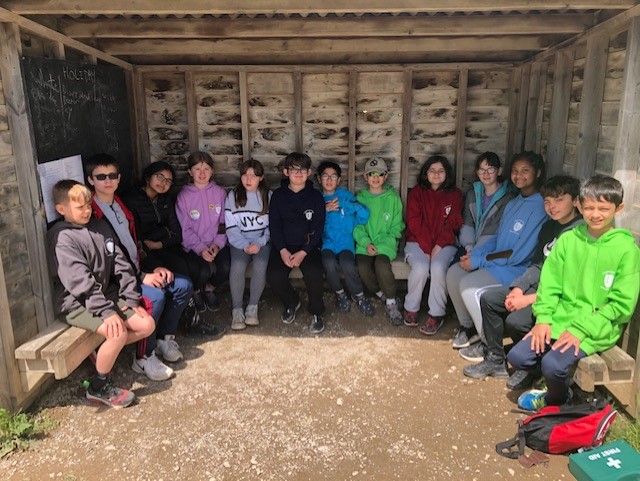