Well what an amazing day we've had.  After getting off the coach in torrential rain we very quickly found our dorms and began settling in.

Our first activitiy ws pond dipping and we found lots of creatures, including a water scorpion, mayfly nymphs, water louse and water snails.  Big added bonus was that no-one fell in!  Then we returned to the building and had a well deserved lunch, some of us even ate al fresco.

In the afternoon we had problem solving activities and all of our groups worked really hard to work together as a team.  In free time the children have built a den in the woods and were excited to show us.  We have seen a Munkjack deer, a white marbled butterfuly and a heron.

After dinner, we had a scavenger hunt, looing for clues around the site, which was great fun, before ending our day with hot chocolate around the campfire,

Year 4 have been amazing today, with fantastic manners, appreciative comments and they have been a pleasure to be with.

After a not so early night (!) the children were awake bright and early although a few were not particularly bushy tailed!  We had a hearty breakfast (lots of seconds) and started with a dormitory inspection.  Parents, please take note, they were immaculate.  No clothes on the floor, suitcases stacked neatly and bedded folded ready for tonight.  Well done Year 4!

Our first activity was archery and the children excelled.  We had quite a few bullseyes, with many children showing real promise.  Robin Hood woud have been keen to have Year 4 join his merry band.

The chidren made their own sandwiches and enjoyed their lunch before setting off on the orienteering course.  We split into three groups and there were some real stars, who showed off their map reading skills whilst exploring the woods and pond area.  The activity ended with some very weary legs and that was just the adults!

To round off the day, before dinner, Mr Smith ran a mini first aid course where the teatment of burns, cuts, bumps and sprains were covered.  Also, when and how to contact 999.  All necessary life skills.  The children particularly enjoyed bandaging each other and fortunately we didn't end up with any mummies!

After dinner, this evening, we were lucky enough to have an ice cream van visit and got to choose whatever ice cream we wanted.  Yummy!  This led nicely into our long awaited talent show.  We were all treated to a range of acts including magic, card tricks, singing, comedy and dancing.  What a great way to end the night!

We are now all hoping for a slightly early bedtime and looking forward to our final activities tomorrow. 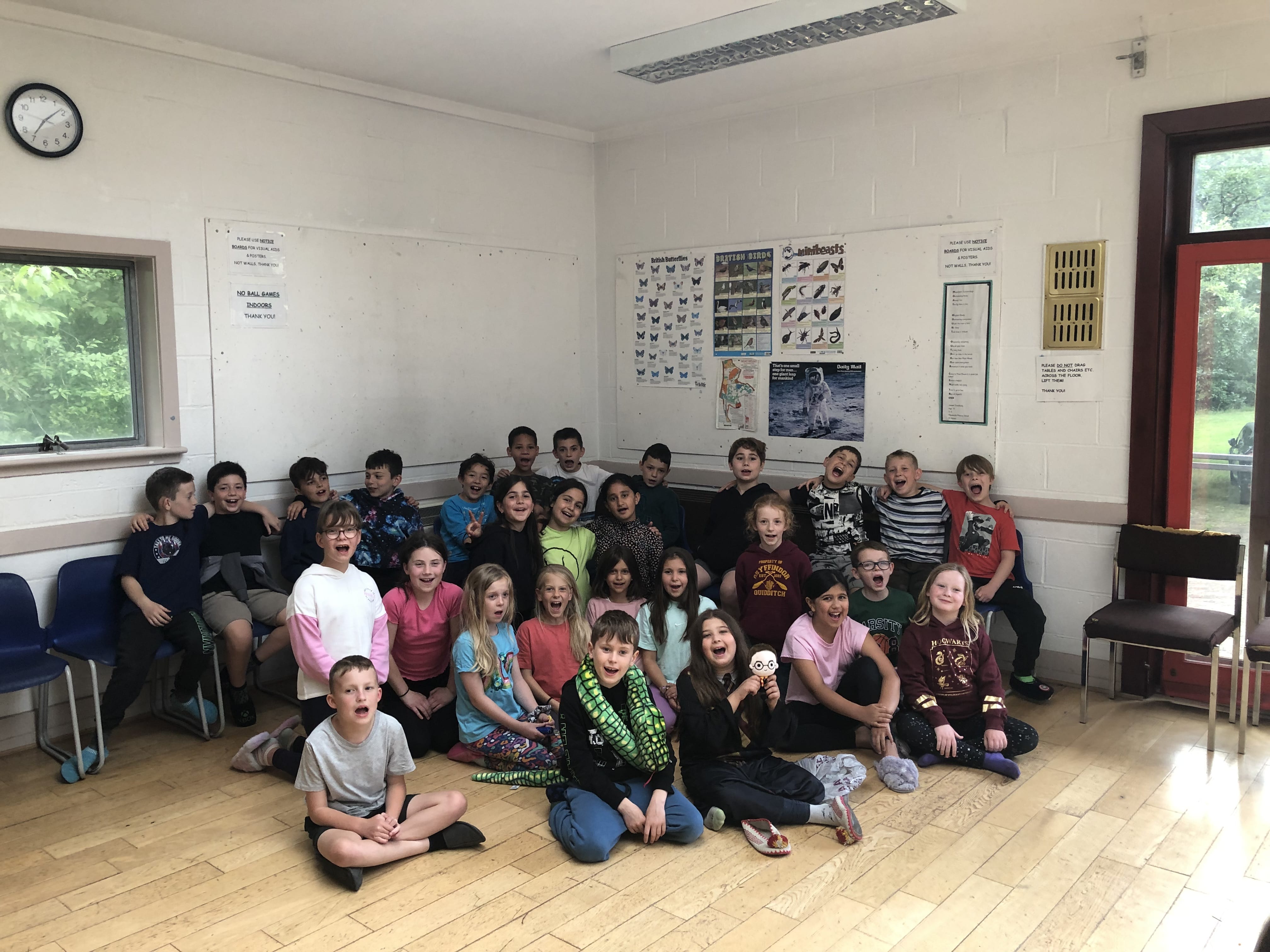 This term, Year 4 have been lucky enough to have some professional tennis coaching, thanks to an initiative run by the LTA. We were offered funding for either tennis equipment or coaching, and as we have new racquets we chose the latter.

On Tuesday 15th March, Karl Mills the coach at Potters Bar Tennis Club came to school and put the children through their paces. They played games which improve coordination, and then put those skills to the test using an improvised net stretched between the netball posts. It was the day before storm Dudley, so the wind was just a tad strong, but that didn’t put the children off at all. They were all enjoying playing mini-rallies across the net and learning to control the ball.

The following week, the class visited the tennis club. The PBTC committee have kindly allowed us to use the courts for our sessions, so that the children can get a real feel for the game. Thank you PBTC Committee!

Since then we have had further lessons, where the children are learning basic skills of controlling the ball, having mini-rallies, volleying with more to come. Our thanks to Mr Ward (PE lead), for making this possible, and also to Karl for making the sessions so enjoyable.

Watch out for the next Andy Murray or Emma Raducano!

The new topic in Year 4 for Science is Rocks and Soils.

On Tuesday 11th January, the class took a field trip, to the Japanese Garden in Parkfield, to see what rocks they could find in the local area. The children really enjoyed their walk, and found many different examples of rocks, both decorative and practical, as they examined the paths on their route.

On the way back to school, we walked past the Oakmere Park entrance and the War Memorial, where we found examples of stone structures, not usually associated with buildings in Potters Bar. We also took time to discuss the materials used to build the flats and houses, and compared these to St Mary the Virgin church on the walk, which is also made of stone.

We will be using the information gathered to investigate the different types of rocks found under the Earth’s surface.

On Thursday 18th November, Year 4 were delighted to welcome parents back in to school to perform their class assembly. It had been two years since the children had been able to showcase their work and they were very excited to show their parents what they had been working on this term.

They began by reading out some writing from their work on Stories from Other cultures. They had read a number of stories from different parts of the world, and learned that they either tell how something was created, or give a moral for the reader. The text they had written was based on an animated film, The Catch, about a young fisherman who has the repsonsibility for feeding his tribe, but can't find enough fish. A wily fox comes to his rescue, but at the end you are left wondering whether the fox is real or a spirit.

Next the children read some of their Autumn poems, having learned about rhythm, rhyme, alliteration and similes. Some of these can be seen below.

This half term our science topic was light, and we conducted some experiments to show what we had learned in the topic sharing this knowledge in the assembly.

During black history month, we learned about an explorer called Matthew Henson, who had tried to find the exact North Pole. The children had created fact files about his life and learned how he had not initially been given the credit for his work, because he was a Black African American, despite having extensive knoweldge of the region which he learned from the Inuit tribe.

Our topic for this term is In the Spotlight where we have learned about theatres around the world, the architects who built them and where they are located. The children had great fun finding the London theatres on a map and working out co-ordinates and followed clues to locate the relevant theatre.

For our finale, the parents watched a vidoe of the children performing a dance, which they learned having taken part in a workshop about teamwork earlier in the week.

The children thoroughly enjoyed being able to share some of their work with their parents. Well done Year 4!

In the second week of term, 14 September, Year 4 children started their swimming lessons at Furzefield.

Since the start of the first lockdown, swimming was not possible, so it was a real treat for the children to travel on the coach and start their swimming lessons. Swimming is probably one of the most important life skills to learn - it literally can save your life.

The class have taken to the lessons like ducks to water! They have excitedly joined in with the activities set by their swimming teachers and are learning new skills. Hopefully by the end of the 10 week block, they will be able to swim on their front or back for 25 metres. They will also learn some life saving techniques and skills.

This is what some of the children had to say about their experience so far:

"The swimming teachers are really nice, and we learn new skills."

"At swimming I learnt to swim on my back, and it felt amazing!"

"I like all of the things we do, but I especially like when we jump in at the end. It makes me feel so proud."

"It's important to swim, because if you fall in to water and think you're drowning, you can save yourself. Swimming calms me and I can swim faster."

"My favourite stroke is front crawl, because you can see under the water. Being able to swim makes me feel safe on holiday."

"When I beat my record, I am determined to beat it the next week. I always get butterflies, but I can do it."

"Today I swam as far as I ever swam before."