Children from KS 1 have been talking about their P.E. experiences

WHAT SORT OF P.E. HAVE YOU BEEN DOING THIS TERM?

HOW DO YOU KNOW IF YOU ARE DOING WELL IN P.E.?

CAN YOU TELL ME ABOUT A SKILL YOU HAVE LEARNT THIS TERM IN P.E.?

We have been playing games

Mr. Palmer has lots of games in mind for us and then he shows us how to play them and we practice

I like the games we can play. Like Dropball and Stuck in the Mud. There are rules for each different game and you need different skills for each game. We need to follow the rules so the game works.

We have been using beanbags. We put them on our head and walk around. We have to go around a course. We did a game called ‘How to move like an Animal’. We moved around the hall like our animal and then had to stop in our best animal pose – frozen – when the teacher said stop

In team games the teams have different coloured tops. I enjoy P.E. I really like games.

We have been playing games - Ice and Fire and Bench Ball. Bench Ball is the first game when we ‘eached’ each other. I like the game at the end because it gets harder. When there are less people then you are not so sure where to hit the ball to score.

We have been running - I love running

I ran around the playground and I didn't stop

Now I am really looking forward to racing

When you run out of energy, you can run with your heart

P.E. helps you to stay healthy. We learned about it in our topic ‘Marvellous Me’.You have to eat vegetables and you have to do exercise. I do lots of running at break times.

We have been throwing and catching

We have been doing games with balls and bats. We had to try and keep the ball up. You have to concentrate and have coordination

We have been throwing, kicking and catching. I like kicking because it’s good for football. Throwing is good for netball and basketball but in netball they throw a different way. We had to kick the balls at cones to hit them. It was like trying to hit the target.

We have been doing gymnastics

Teddy bear rolls, sausage rolls, log rolls and balances. Mrs Trott tells us to try and then she tells us how to make it better. I like going on the apparatus.

I watch other people do it and then I know how to do it myself.

If somebody does well, Mr Palmer says, "Good work. Look at his postiion." 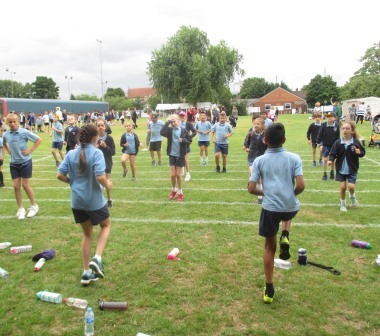 Children from KS 2 have been talking about their P.E. experiences.

WHAT SORT OF P.E. HAVE YOU BEEN DOING THIS TERM?

HOW DO YOU KNOW IF YOU ARE DOING WELL IN P.E.?

CAN YOU TELL ME ABOUT A SKILL YOU HAVE LEARNT THIS TERM IN P.E.?

We are going swimming

You have to be safe

We have been doing netball and hockey

We have been playing hockey. You have a ball and a stick. You have to hit the ball with the stick. We did it a bit in Year 2 so we know how to do it. We have learned new skills. You have to score a goal in a match.

We did it in Year 3 so I am good at it – I know what to do. You pass the ball and you keep your stick below your waist. This is a big rule. Mr Palmer tells you ‘Good work’ if you are doing well but I know anyway because we did it before. People show examples to other people.

We have been learning about the rules of invasion games, like hockey. You can’t play a game without the rules. In invasion games it is hard because you have to think about teamwork. Mr Palmer stops the games and tells what we need to do to improve and then lets the games go on so we can play. At the end of the session he gives out ‘well dones’. He tells us who the P.E. stars are.

We have been playing hockey matches. You can’t just go out and play you have to do a warm up first. Sometimes the bit where you learn a new skill is boring because you just want to play a game. To score a goal you need to make some space so that a team mate can pass to you, it helps if you can pass with the right amount of power and control the ball. At the end of the lesson you do a little wrap up about the skills we used.

You can use a bounce pass for better accuracy

We have been running in the mini marathon

I like P.E. because there is no writing. You need a break. We have been lots of tests. Actually it was quite helpful and quite funny because one of the tests was about keeping fit.

You have to pace your self - when we first did the run, some people just sprinted and then they had to stop. Hardly anyone stopped at the end and some of us did extra laps

We have been doing dance

We have been doing dance. I suppose it is a bit topic related because the dance was about building the pyramids. We had to help Mr Palmer to think of all the actions

I liked the music. We learned all the moves on the song and then we made up our own moves. We did travelling, jumping and turning and a pose where you don't move at all. Some people fell over but some people were really good at it when they performed their routines.

We have been playing tennis

If you do well in tennis you will hit the ball and the other person would have the chance to hit the ball also. He shows good work and gives us the next thing or level to do. He makes it harder.

I play tennis at playtime - I am getting really good

We have been doing gymnastics

You need control. Somebody in our class is really good at gymnastics

We did five different balances on the apparatus

I like P.E. because it is fun. All the movement is great.

In cricket we learnt batting and bowling

I learnt to show my elbow when you do straight drives. Mr Palmer shows us and then he picks somebody to do an example – somebody who gets the ball quickly. He keeps on giving encouragement

We learnt how to aim when you bowl. I'm good at that because I play for a club too. Then we learnt finger positions for battig - hold the bat like baby chicks - really loose.

Mr Palmer makes it easy which is good because sometimes the games are complicated. I didn’t understand how to play cricket until he explained clearly. 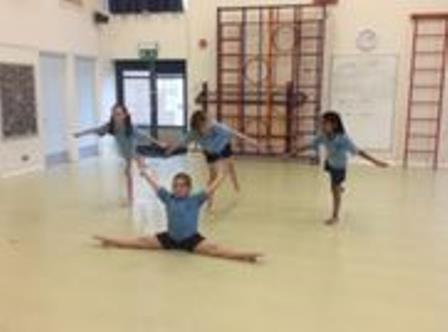 Competing is exciting and winning is exhilarating, but the true prize will always be the self-knowledge and understanding that you have gained along the way.
(Sebastian Coe)

At Ladbrooke JMI School, PE and sport are integral parts of the curriculum.  The curriculum has been designed to ensure ALL pupils are inspired to have physically active lifestyles now and in the future.  Our high quality delivery allows for the development of fundamental skills in a wide range of activities which will ensure our children recognise their own knowledge and  understanding and above all else enjoy physical activity and achieve success. 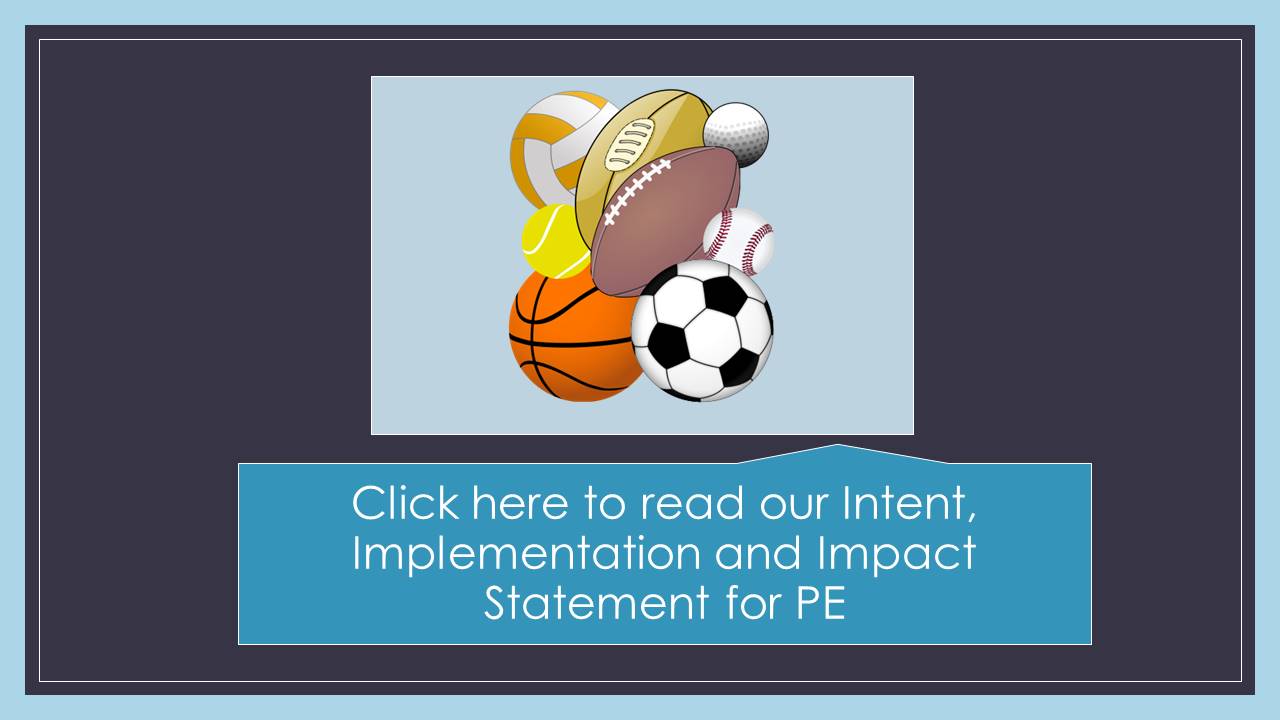 All children have access to at least two hours of physical activity each week. In partnership with our external provider we ensure that the progression of skills throughout each year group is well planned and consistent. Children have one lesson with a Challenge Sport and Education specialist P.E. teacher and a further hour lesson with their own class teacher. This approach not only ensures that children experience a range of P.E. opportunities but also that all teachers continue to develop their knowledge and skills to deliver enjoyable lessons.

Our curriculum focuses on children devloping the knowledge, skills and understanding of their own bodies and capabilities and how they can use them to participate in a range of increasingly challenging physical activities. We hope that all children leave Ladbrooke with an understanding of the importance, benefits and enjoyment of physically active lifestyles and the desire to stay active for life.

Assessment is carried out continuously against our Key Skills targets. We recognise that children acquire P.E. skills in a variety of different ways and at different levels of personal ability. Our curriculum therefore is fully inclusive for all children - from the acquisision of key physical developmental milestones through active play in our excellent Early Years Foundation Stage to the ability to use their skills to represent the school in competitive sport. 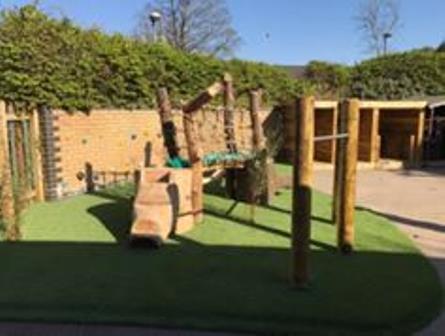 Swimming is an important part of the curriculum and we are fortunate to have high quality facilities locally. Children in Year 3 and 4 recieve swimming lessons and the vast majority of our children become confident swimmers in a range of strokes. 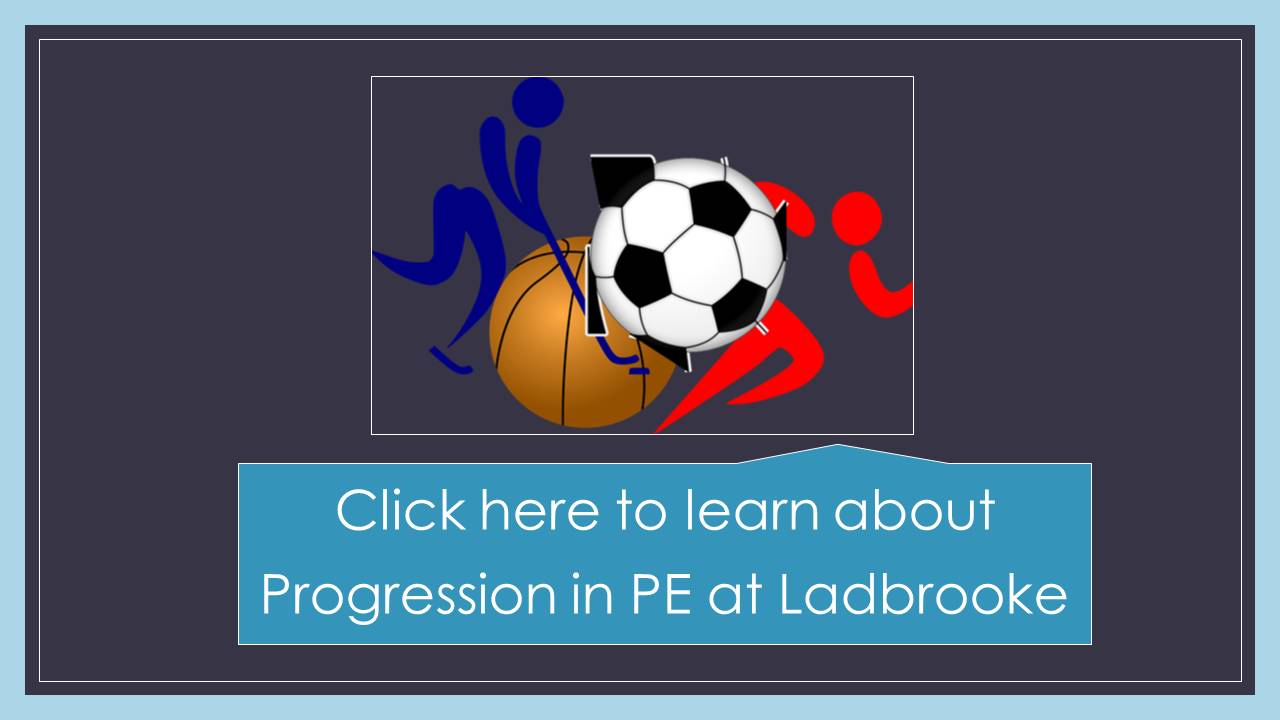 The funding must be used to:

1. Develop or add to the P.E. and sport activities that schools already provide.

2. Build capacity and capability within schools to ensure that improvements made now will benefit pupils joining the school in future years.

We have published details of how we have spent this money here.

Highlights include spending on:

Many of our children participate in activities outside of school and we regularly celebrate their achievements at our whole school assemblies.  In addition to our curriculum provision we also encourage active participation in our extra curricular clubs. Information about these clubs can be found here.

As part of our whole provision our children also have the opportunity in Years 4 and 6 to particpate in residential activity trips. During these very memorable excursions all children are given access to adventurous outdoor activities in safe yet challenging situations. For many these trips are one of the highlights of their primary school experience.